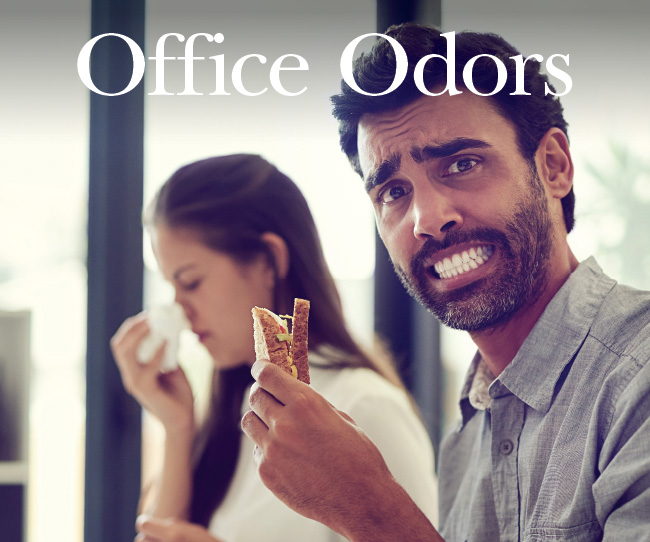 We live in a litigious society, so sometimes you just have to spell out things for people. That’s why shampoo bottles have instructions printed on the labels, and that’s why we have to click so many virtual buttons online that indicate we have read the terms and conditions for the service to which we are subscribing. (Honestly though, who reads those?)

That’s also why some U.S. companies have policies in place, warning against potentially offensive odors in the office — of both the personal (perfumes, colognes, hygiene) and food (fish, for example) varieties. One would think it is quite obvious that one should not reheat fish in the office microwave, but people do it. You’ve likely experienced this type of respiratory assault at your workplace. And if you’re inclined to bring your leftover flounder to the office for your midday meal, please stop. Consider your coworkers.

I mean, smelly lunches and bad hygiene might not be grounds for a winnable lawsuit, but employers certainly don’t want to find themselves in arbitration with staffers over such a seemingly small issue when a simple scent/fragrance-free policy would keep most people in line — and the rest of us from having to complain about the odors. But surprisingly, at least one study finds that only a small number of companies have or enforce such policies.

According to a 2018 survey by the Robert Half Company, the world’s largest staffing firm, just 19 percent of the workforce claims their employer has an established scent/fragrance-free policy. That means no smelly foods, no perfumes or colognes, and no flowers or candles at your desk. Are other employers relying on common sense — or are they simply dismissing complaints from staff regarding kitchen smells and over-applied body sprays?

Respondents to that Robert Half survey were asked how they reacted to offensive odors in the workplace. A shockingly high 46 percent claimed they let the perpetrator of said offense off the hook, choosing to suffer in silence. Just 17 percent said they have confronted a coworker over an offensive smell or fragrance, while 15 percent asked HR personnel to intervene.

Honestly, would you ignore repeated attacks on your olfactory receptors? Could you be productive when the person in the cubicle next to you is snacking on Roquefort cheese and burning a scented candle? Let’s be clear, I’m not talking about reporting a colleague to HR because he comes back from lunch smelling of sweat. It’s hot out there; people sweat. Don’t get bent out of shape over that, but if your employer doesn’t have a policy in place governing offensive smells, perhaps it’s time to look into it.

The Power of Parenting