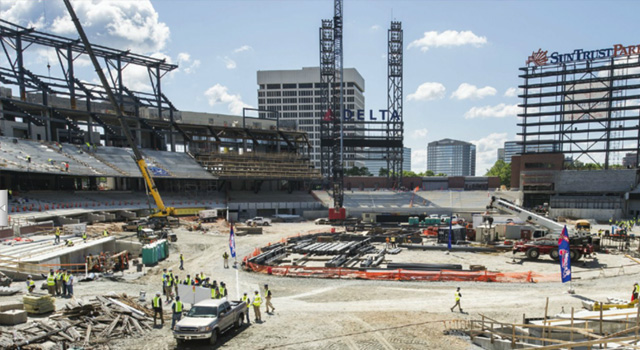 In the Atlanta Braves’ continued efforts to grow its development adjacent to SunTrust Park, the organization recently announced that it is welcoming eight new culinary, retail and entertainment concepts to the lineup at The Battery Atlanta.

With partner Fuqua Development, the Braves have received commitments from the following companies, which are scheduled to open next spring:

“This blend of retailers and restaurants will help us create the 24-7, 365-day-a-year environment we’re aiming for at The Battery Atlanta,” said Derek Schiller, Braves president of business in a press release. “We’re very excited to have a bunch of firsts for this market, including Wahlburgers and Kings Bowl. Additionally, The Cordish Companies have been an industry leader in creating vibrant spaces that have set a new standard for entertainment in partnership with professional sports venues.”

Fuqua Development Principal Jeff Fuqua added that the “impressive” list of businesses shows that The Battery Atlanta is already a magnet for top-notch local and national retailers, entertainment uses and restaurants. “And there is more to come,” he said. “We expect to make great announcements soon as we work with the Braves to enrich the mix of businesses featured at The Battery Atlanta.”

Visitors can get a sneak peek of The Battery Atlanta development by viewing a fly-through video online at batteryatl.com. Learn more about the 41,500-seat stadium and tickets prices, which went on sale in May, by visiting braves.com/suntrustpark.