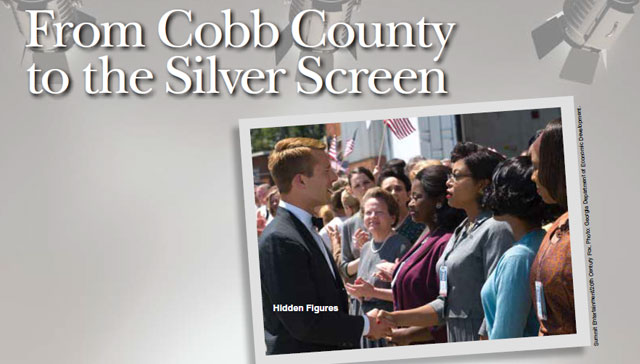 Have you ever been watching a movie and thought, “Hey, that place looks kind of familiar…”? That’s probably because it is. Cobb County is a popular location used by the film industry, and with ideal landmarks and resources, it’s easy to see why.

“There are a lot of great things going on in Cobb County for filming. Everyone is working together to foster some great relationships within the production community,” says Holly Quinlan, CEO of Cobb Travel and Tourism. “It’s a really exciting way to put Cobb County on the map.”

Among the recent films that have helped to put Cobb County on the map are “Remember the Titans,” which filmed at Marietta’s Sprayberry High School, and “Footloose” (2011), which used Acworth Mayor Tommy Allegood’s house.

“We have antebellum homes, quaint neighborhoods, small streets, [and] little bungalows. We have a fair amount of commercial areas, too,” he said. “I think we have a good reputation for being film-friendly and [the county is] good at turning over a permit quickly.”

For a film corporation to receive a permit to use Cobb County grounds, they must first report to Quinlan. Then the director will fill out a form about what is happening in the movie and what the production’s needs are, followed by any additional meetings to make sure all ends are tied. “It’s the ease of access and cooperation of local government that draws people to Cobb,” said Quinlan.

Cobb County is “big enough to be big and small enough to be small,” according to Buss, and that makes organizing things like road closures easier. Though the current movies and shows filming in Cobb typically are kept under wraps, you can watch out for stars such as Hugh Jackman, J.K. Simmons, and Jennifer Aniston in familiar places for their upcoming films, “The Front Runner,” and “Dumplin.’”

Other movies to watch out for identifiable landmarks include “Pitch Perfect 3,” “Hidden Figures,” “Dumb and Dumber,” “Selma,” “Diary of a Wimpy Kid: The Long Haul,” “The Hate You Give,” “The Resident,” and TV shows such as “MacGyver,” “Atlanta Eats” and “Man v. Food.”

Playing host to big celebrities like Cameron Diaz, Jim Carey and Oprah is not just a cool fact: it’s also beneficial to the community to have these stars and their productions around town. “The economic impact they leave behind is significant,” said Quinlan, explaining that the crews use resources like hotels, restaurants, construction companies, dry cleaners and warehouse space during production.

Local businesses are not the only ones that can benefit. While most film and TV productions turn to social media to announce their need for extras, the Georgia Department of Economic Development’s website — Georgia.org — has further information on how you can get involved. Simply navigate to the “Casting and Crew Jobs” category on the organization’s Film and TV Production page.

The filming locations generally are open to the public, and sites like the Cobb Energy Performing Arts Centre have become a stop on Atlanta film tours — evidence that the industry is growing.

So whether you’re watching on the small screen or the silver screen, keep an eye open for Cobb County landmarks that could be dressed up to look like the Netherlands, the Old South or anything in between. With a booming industry and a versatile county, there’s no telling what could come next. 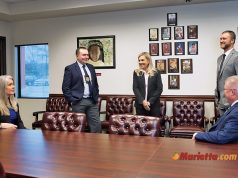 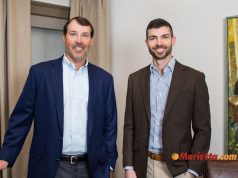