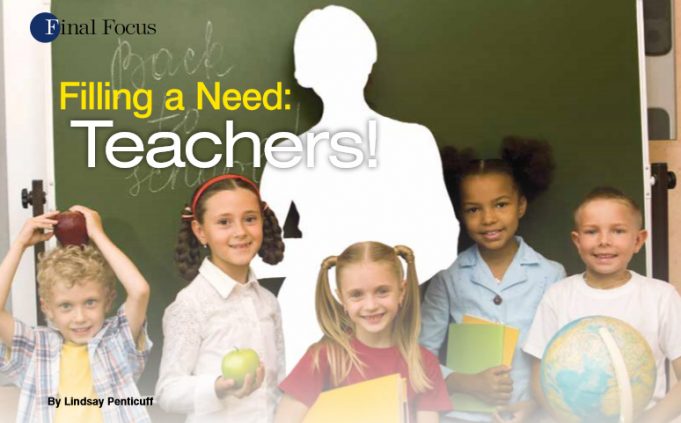 According to a column in the most recent issue of PAGE One, the Professional Association of Georgia Educators’ magazine, enrollment in teacher preparation programs is down and more than 40 percent of teachers who enter the profession leave within five years. I’ll admit that as a journalist there have been moments when I’ve considered leaving the profession permanently, but I always come back to it.

I was curious what teacher numbers in the Cobb County School District might look like — the second-largest system in the state — so I called Deputy Superintendent John Adams, who says Cobb is dealing with shortages, and learned that they still aren’t as bad as it is in some states and other Georgia counties. In the past, Adams says they’ve had 20-100 qualified applicants for each vacancy, but currently, they are only seeing 10-50. “The market has tightened, but we still have sufficient applicants for most positions.”

Fewer students, Adams says, are going to college for teaching for a number of reasons, including relatively low salaries — starting salaries are about $32,000 for first-year teachers — changes to the Teacher Retirement System, potential changes to their benefits, overemphasis on state testing and unruly students.

But that doesn’t mean Cobb has just thrown in the towel. The last two springs, CCSD has dramatically increased the hiring and recruiting timeline, giving out contracts as early as Feb. 10, which in 2016 was the earliest that any district in Georgia had ever given them out. It allowed Adams and his team to determine their allotments and see where vacancies are early. And awarding early contracts allowed Cobb to take the first crack at college graduates or people looking to change districts. “We were looking at hiring the cream of the crop!,” Adams says. The district has also waived teaching certifications to help draw more educators.

In addition, Cobb hired a district recruiting supervisor who visits 30 colleges in the region, aggressively recruiting students and touting the virtues of Cobb. “We think it’s been working very well,” Adams says. They also hosted two job fairs last spring, drawing 1,800 total candidates searching for teaching jobs in Cobb County. It, too, was held in March before most districts began awarding contracts.

How are they retaining good teachers? Adams says the trick to retaining teachers is to accept the reality that teaching isn’t for everybody. “It’s a hard job with long hours and relatively low pay, so it’s OK if a small percentage of our folks decide that it’s not right for them, but we do want to retain high-quality teachers.” Part of the district’s recruiting supervisor’s duties include retention, so he is putting together teacher focus groups this fall to learn more about what keeps teachers in Cobb County Schools. They will also be sending out an anonymous teacher survey this fall, seeking advice on how to make Cobb an even better place to work and teach. “Crazy idea,” Adams says, “if you want to keep your people, ask them what you can do to make them stay.” Halfway through the school year, principals will be asked to conduct “stay” interviews, too. This, Adams says, will give the administration a chance to find out what they can do to keep a high-quality teacher in the district and at their school.

As Mr. Adams said during our call, “teaching is a difficult job, but the most important one in the world.” My father and mother both taught for 35-plus years, my aunt proudly taught right here in Cobb County for nearly 40 years and my grandfather taught for 42 years. And while they came home most nights worn slap out, they all truly loved their jobs. It’s not easy, but it takes a special person to teach, encouraging children to be successful. Your love, dedication and commitment are very much appreciated!