Home News A Piece of the Pie 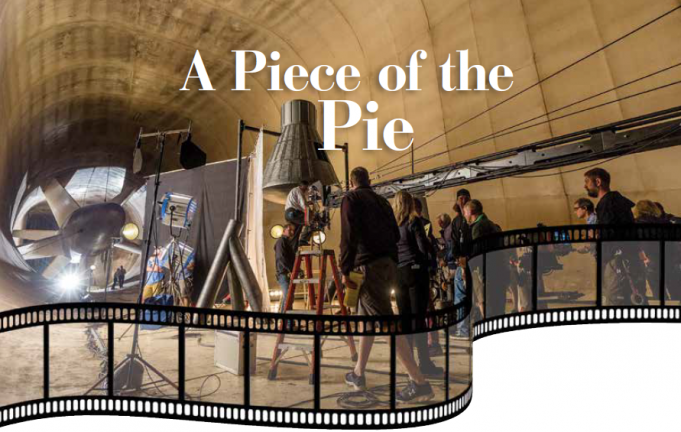 “If I had to do this movie all over again and I didn’t even have a tax incentive, I would go to Georgia. Now you know why it’s called Hollywood East.” That’s a ringing endorsement from Theodore Melfi who directed “Hidden Figures,” and filmed the entire movie in Georgia in 2016.

In January, “Hidden Figures,” a film that tells the story of the African-American women working at NASA who helped launch astronaut John Glenn into orbit, premiered in theaters nationally. While the storyline took place at the Langley Research Center in Hampton, Virginia, in the 1960s, the movie was filmed in Georgia, with many of the scenes shot at Marietta’s very own Lockheed Martin and Clay National Guard Center.

According to a short documentary about filming in Georgia produced by the state’s economic development department, the director, executive producer and production designer all fell in love with the area when deciding where to shoot the movie. “Tax incentive aside, I can’t imagine shooting this film anywhere but Georgia. It was like the most remarkable place to work. The people are amazing and friendly. The crew is fantastic and kind and very professional and knows what they are doing, and the locations are like staggering,” Melfi said. “The town, the city and the state opens its arms to you and embraces you and they want you there and you feel needed.”

Melfi added that because of the wide range of well-preserved historic buildings throughout the state, he was able to easily recreate the look and feel of the ‘60s: “It’s just like a perfect place to shoot. … Lockheed Martin was incredible for us. We met great people there and they were just so supportive of the field.”

“Lockheed [Martin] has a wind tunnel that’s the same time period as the wind tunnel that was at Langley [Research Center] at the time, and that wind tunnel is no longer there. In fact, I think there are less than 10 wind tunnels like it in the country now and I think this is the only one we could have shot at,” said Executive Producer Kevin Halloran.

At Clay National Guard, the hangar was one of very few period correct hangars big enough to show the training of the astronauts in the film. “[It] was an opportunity for us to recreate a moment that really did happen. We recreated a press conference that happened in real time,” said Production Designer Wynn Thomas.

You and I know just how great Georgia is — the historical uniqueness of the area, landscapes and friendly people. But to have some of Hollywood’s finest pick Georgia as “the place” to film a movie that is being recognized by more than a dozen awards organizations, including the Oscars, Golden Globes and Screen Actors Guild, really speaks to what we are doing here. I’m incredibly proud that Cobb County locations like Lockheed Martin and Clay National Guard are in the national spotlight and I hope that this opportunity opens doors for more chances to bring the West Coast our way, highlighting the rich history, as well as the exciting new developments we have here.