Home News A Hand Up, Not a Hand-out 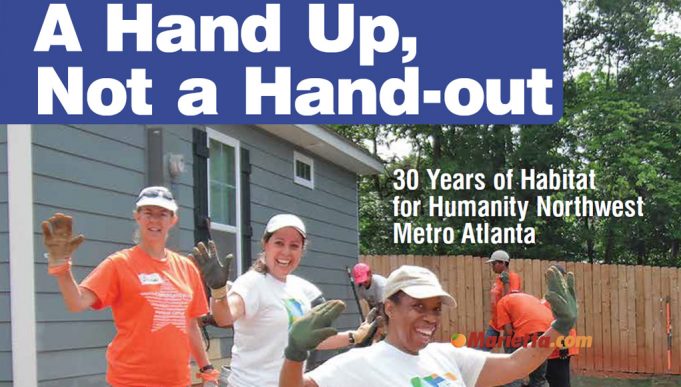 Not many single mothers can say they paid off their mortgage early, but 47-year-old Elaine has more than earned the right to brag. In 1998, her life changed dramatically when she moved into her first home, thanks to her own hard work in partnership with Habitat for Humanity Northwest Metro Atlanta, which serves Cobb, Douglas and Paulding counties.

“Around that time, I was living in an unsafe apartment with my two young sons,” recalls Elaine, who works in health care in Cobb County. “Being able to connect with Habitat and get my own house was an answered prayer, really the first of many. Habitat turned my life completely around.” In March of this year, Elaine made her final payment on what was a 20-year interest-free mortgage, three years ahead of schedule.

Her journey to home ownership was not a handout; she worked diligently through the Habitat process, from taking classes to learn to manage a budget to investing sweat equity in the building of her own home and several others. “I had been renting and living paycheck to paycheck and I made the decision this time — with Habitat’s help — that I would be smart about managing my life and conscientious about my money. It was a true blessing.”

Elaine’s story is one of many made possible by NW Metro Atlanta Habitat. Since its founding 30 years ago, the organization and its strong committed network of sponsors and volunteers have built more than 450 homes. Additionally, the affiliate has funded the building of more than 300 homes for its sister program in Uganda as part of its tithe program with Habitat for Humanity International Inc.

“Our vision is to continue to grow our ministry in Cobb and further expand into Douglas and Paulding,” says David McGinnis, president and executive director of NW Metro Atlanta Habitat. “We’ve been expanding our sponsor base and our volunteer partner organizations to minister to the low- to moderate-income segment of our community so that they can have an opportunity to own their own home.”

McGinnis, a long-time banker and businessman in Cobb, joined NW Metro Atlanta Habitat in January 2014, bringing his management expertise, strong Christian faith and northwest Atlanta connections to the organization. “One of the first things we did was recognize that we needed a much broader community presence, especially among businesses and corporations here,” McGinnis says. “I know that Cobb has long been a place where businesses generously support the community, and what better partnership is there than to minister to the needs of others? It’s a win-win for everyone who is touched by Habitat.”

Habitat for Humanity International Inc., founded by Millard and Linda Fuller in 1976, grew out of a small interracial Christian community called Koinonia Farm, located just outside Americus. In the late 1960s, the Fullers and Koinonia founder Clarence Jordan, under the concept of partnership housing, plotted 42 half-acre home sites to build homes that were sold to families at no profit and mortgaged through no-interest loans. That program became the model for Habitat for Humanity, which has helped more than 6.8 million people around the world have affordable shelter.

“Our mission is to put God’s love into action and bring people together to build homes, communities and hope,” McGinnis says. “You’ll hear so many of us say time after time that this is not a hand-out, it’s a hand up. Our sustainable model requires that potential homeowners participate in building their homes and that they attend classes to learn about managing their money and budgets. It’s like the saying ‘Give a man a fish and you feed him for a day. Teach a man to fish and you feed him for a lifetime.’ What our sponsors and volunteers do is truly amazing.”

Habitat relies on the business community for its ongoing success and growth, both for financial support and as a source for volunteers. Kevin Murphy with KeyBank first learned about Habitat when the bank sought a community partnership in Cobb. As Murphy learned more about Habitat, he worked on home builds as part of KeyBank’s corporate commitment to give back. Six years ago, he joined the NW Metro Atlanta Habitat where he continues to serve.

“Habitat is positive in so many ways, from helping provide homes for deserving, hardworking people, to coming together with employees from your company to give back to the community in a very tangible way,” he says. He reiterates McGinnis’ comments. “We don’t give away houses; we build and finance homes for deserving people who also do their part, from the 100 hours of classroom training, to their 200-hour participation in builds of both their own home and others.”

Corporate sponsorship is multi-dimensional — financial support is crucial, but it’s only part of the story. Sponsor company employees are the hands and muscle behind the construction of nearly 20 home builds annually. Employees work side by side with other community volunteers, plus Habitat homeowners and their families on each nine-week build project.

“About seven years ago, our company was looking for a way to give back to the community,” says Susan Nofi, senior vicepresident of human resources and general counsel with the Cobb County offices of Heidelberg USA Inc. “We wanted to find an organization where we could combine our financial support with volunteerism for our employees. From the first time we stepped on site, we knew that we had found that match. The camaraderie among our employees, the ability to breakdown silos between departments — which is an issue in virtually every company — and the ability to give back is wonderful. To see that you can change a family’s life in nine weeks is amazing. I would encourage any corporation that is looking for something meaningful for their employees to share in, as well as something that they can be proud to support to look at Habitat.”

In addition to corporate sponsorships, NW Metro Atlanta Habitat relies on its “Grey Ghosts,” a dedicated team of between 20 and 25 retired business people who perform the behind-the-scenes work between build days, things like interfacing with electrical, HVAC, plumbing, drywall and roofing subcontractors, plus managing all the details so that the volunteer builds go smoothly. “We have great camaraderie working together during the week and serving as house leaders on the weekend builds,” says George Davis, a commercial pilot whose weekend work with Habitat expanded in 2002 when he retired. “There are so many tangible benefits in working with Habitat, because it has such a strong impact on the community and individuals.”

Habitat board member and “Grey Ghost” volunteer Mike Christian and his wife, Pam, have been involved with Habitat since 1992, when their church, St. Catherine of Siena in Kennesaw, and several other catholic churches came together to build homes. He started out as chair of the in-kind committee, responsible for helping secure donations of building materials, tools and supplies. He recently retired from a job in business-to-business sales in finance.

“I knew that with retirement I would need something to get excited about every day, so now I have a new job with Habitat,” he says. “I just don’t draw a paycheck.” But what Christian gets every day, in his words, is worth more than a regular paycheck. “It’s the thrill of working side-by-side with people who share the same commitment you have and making such an impact on the lives of good people every day. We’re not just building houses, we’re changing lives.”

As everyone involved with Habitat for Humanity says, “What will you build?” Visit nwmetroatlantahabitat.org for more information.