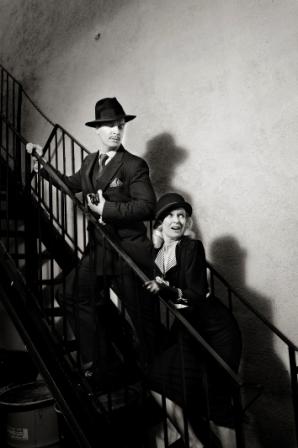 Real-life husband and wife Jason MacDonald and Catherine Dyer take the stage together in Theatre in the Square’s The 39 Steps. The play, which is adapted by Patrick Barlow from the novel by John Buchan and Alfred Hitchcock’s movie by the same title, opens Wednesday, January 19, at 8 p.m. on the Main Stage. Tickets are available at the Box Office or by calling 770-422-8369.

A two-time Tony® award-winner, The 39 Steps is a fast-paced thriller that follows Robert Hannay (Jason MacDonald)’s attempt to prove he is innocent of murder even while being chased through England and Scotland. Along the way he meets Annabella (Catherine Dyer) who tries to give away his identity to anyone who will listen and who quickly develops a love-hate relationship with Hannay. The amazing cast of four also includes supporting actors Bryan Mercer and Scott Warren. Mercer most recently was seen at Theatre in the Square playing over 11 characters in A Tuna Christmas. His quick change skills will definitely come into play as he and Warren play dozens of additional characters that allow the intricate details of the story to unfold. This show will have audience members on the edge of their seats in suspense and laughter.

Husband and wife MacDonald and Dyer, both professional actors, are excited to be on stage as love interests.  They have been on stage with each other in both L.A. and New York, but this will mark Catherine’s Atlanta stage debut. Jason was last seen in Atlanta in 26 Miles at Alliance Theatre, but you may also find him at the Atlanta restaurant he co-owns, Stone Soup Kitchen.

Bryan Mercer (Clown) has performed in Theatre in the Square’s A Tuna Christmas, Greater Tuna, Room Service, Incorruptible, Master Class, and Death of a Salesman. Bryan also directed the recent incarnation of Library Dragon and musical directed How I Became a Pirate this fall. Many thanks to Jessica Phelps West, Palmer, Ed Howard, and of course, Clint.

Scott Warren (Clown) is an Atlanta artist of 11 years. He has acted, improvised, puppeteered, written, and directed plays throughout the area.  He’s performed with Theatrical Outfit (Confederacy of Dunces, To Kill a Mockingbird, Keeping Watch, The Foreigner), Theatre in the Square (Sherlock Holmes: the Final Adventure), Georgia Ensemble (Season’s Greetings), Actor’s Express (Beautiful Thing), Aurora Theatre Company (Dr. Jekyll and Mr. Hyde) and Alliance Theatre (Class of 3000, Aladdin, Stinky Cheese Man and Other Fairly Stupid Tales) among others.  Scott was recently on an episode of Tyler Perry’s Meet The Browns, and can be seen in the online puppet show Spookhouse Dave.  Love to Sloane and the boys.

Clint Thornton (Director) is very pleased to be part of The 39 Steps on Theatre in the Square’s Main Stage.  Clint has directed several professional productions throughout the Southeast, including Around the World in 80 Days at Theatrical Outfit, Speech & Debate at Theatre in the Square, The Complete Works of Shakespeare and A Shayna Maidel at the Highlands Playhouse, Every Christmas Story Ever Told at Actors Express, A Year with Frog and Toad for Synchronicity, ten years of the popular hit The Santaland Diaries at Horizon Theatre, several productions at the  Center for Puppetry Arts, as well as many Theater for Youth productions throughout the region.  Clint also produced and co-directed the popular Unexpected Showcase at the Woodruff Arts Center last summer.  Also an educator, Clint currently teaches classes for the Alliance Theatre Education Department.  Look for more of his upcoming work, including The Unexpected Showcase 2011 at the Woodruff.  Also an actor, you can see him perform the role of Bradley in Theater Emory’s Buried Child in 2011.  Many thanks to Jessica, and the wonderful cast, designers, and crew of The 39 Steps for a wonderful experience.  And as always, so much thanks and love to Bryan.

Julianna M. Lee (stage manager) has been general manager of Theatrical Outfit, rental/facility manager at 14th Street Playhouse, and general manager/production manager for Theater of The Stars.  Over 40 T-Square productions including: Savannah Disputation, Tradin’ Paint, Sherlock Holmes, Poetry of Pizza, Room Service, All The King’s Men, Bus Stop, Zion!, Boys Next Door, Lips Together Teeth Apart, Turned Funny, Ethan Frome, and Stealing Dixie. She started this season with a train theft incident and now espionage. She’s been assured from the highest levels she’s not placed on a DHS watch list. But a CIA recruiter did leave a card!  Enjoy.

Jessica Coale (Lighting Designer) returns to Theatre in the Square having previously lit Caught in the Net, Looking over the President’s Shoulder, I Have Before Me a Remarkable Document Given to Me by A Young Lady From Rwanda, and A Raisin in the Sun. Jessica is an Atlanta based Theatrical Lighting Designer. She is an Artistic Associate with Synchronicity Performance Group, Theatre du Reve and 7 Stages. Thank you for supporting live theater, many of us make our living via this medium and we appreciate our audience!

Seamus M. Bourne (Scenic Designer/Technical Director) is a recent transplant to the Atlanta area.  The 39 Steps is Seamus’ second design on the Main Stage. Also around town Seamus designed The 25th Annual Putnam County Spelling Bee (GET), Singin’ in the Rain and Sirens (Aurora), and The Woman in Black and How I Became a Pirate here at T- Square. He received his MFA from Indiana University in May 2009. He thanks his wife Anna for all of her love and support, and as usual his work is dedicated to his Grandfather, Mel.

Corey Bradberry (Assistant Director) is happy to return to Theatre in the Square for the second time this season. He played Knight and Fuller in the 2010-11 season opener Stealing Dixie as well as Pierce Garbarino in 2009’s Tradin’ Paint. Many thanks to Jessica and Clint for the opportunity to work on The 39 Steps. Enjoy the show!

Ellen M. Gaydos (Grips/Wardrobe/ASM) is happy to return to Theatre in the Square after recently stage managing How I Became A Pirate.  Past credits include Caught in the Net (Assistant Stage Manager), Secrets of a Soccer Mom (ASM), The True Story of the 3 Little Pigs! (ASM), A Tuna Christmas (Dresser). She will also be working on the upcoming production of The Little Foxes.  Ellen moved to Atlanta to attend Emory University; she spent a year in Dublin and a year in Boston where she worked on many great productions.

Tracey Thomas (Grips/Wardrobe/ASM) is a graduate of Georgia State University. She is thrilled to return to Theatre in the Square. Her previous work includes A Tuna Christmas (2009 and 2010), Stealing Dixie, Greater Tuna, and His Eye is on the Sparrow.

Lindsay Moore (Props Designer) is a recent graduate from Agnes Scott College. She has worked with companies such as Georgia Shakespeare (The Odyssey, A Christmas Story), Synchronicity (Storytelling Ability of a Boy), Actor’s Express (Every Christmas Story Ever Told) and Theatre in the Square (How I Became a Pirate). She wants to thank all of the people here at Theatre in the Square for giving her the chance to work on The 39 Steps.